Karelian petroglyphs, both on Lake Onega and the White Sea, are located on a narrow strip of outcrops of parent crystalline rocks (gneisses, granites etc.) on the shoreline. Smooth shoreline areas gently sloping to the water or almost horizontal served as canvases for rock art. Still the location of the two groups is of two markedly different types. 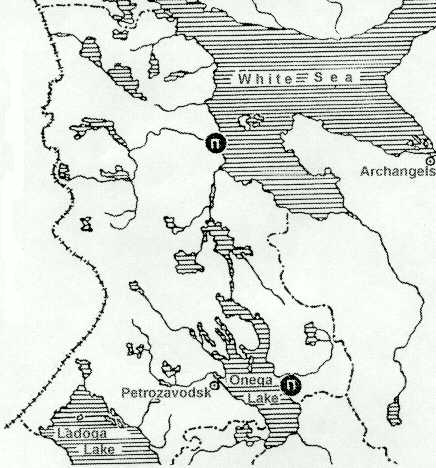 Onega Lake petroglyphs are found in the mid-taiga zone, in Vodlinskaya lowland on a lake shore shaped as a series of descending terraces. The formation of the shoreline and terraces was influenced by the upheaval of the earth crust and changes of the water level in Lake Onega. The landscape type of the area is lacustrine-glacial, plain and slightly paludified with the vegetation dominated by spruce.
The White Sea petroglyphs are located 310 km NNW in the north-taiga subzone on the territory of the White Sea lowland. The landscape type here is different - maritime heavily paludified terraces overgrown by spruce and open pine stands. The landforms of the area are a coastal abrasive-accumulative plain, and a marshy flat.
Natural conditions at the time the petroglyphs functioned differed from modem conditions. They also underwent considerable changes of the climate, forest structure and dynamics, composition of the fauna, water levels. According to the paleogeographer E.I.Devyatova there have been at least 10 periods of growing humidity alternated by drier periods or even heavy droughts since the VIII millenium B.P. Generally speaking the climate then was warmer, flora and fauna were richer. In the Middle Holocene the territory from the southern White Sea area to southern Onega was part of one natural-climatic zone where natural phenomena fluctuated synchronously.
previous | 0 | 1 | 2 | 3 | 4 | 5 | 6 | 7 | 8 | 9 | 10 | 11 | 12 | next
Last modified: July 16, 2006