June 14, 2019
At the beginning of June, reconnaissance expeditions to Vodlozersky National Park and Kizhi Island were implemented by a joint team of researchers from the Forest Research Institute and Northern Water Problems Institute of KarRC RAS and the University of Oulu within SUPER (Sustainability under pressure) project of the Karelia CBC Programe.
The Centre was represented in the expeditions by V.V. Timofeeva, researcher from the Landscape Ecology and Forest Ecosystem Protection Laboratory of FRI KarRC RAS; G.V. Akhmetova and S.G. Novikov, researchers from the Forest Soil Science Laboratory of FRI KarRC RAS, as well as NWPI KarRC RAS employees R.E. Zdorovennov and V.N. Kovalenko.

The sites chosen for the study of recreational pressure in Vodlozersky Park were tourist stopovers on Rogunovo Island and Okhtoma facility, as well as areas around the illegal waste dump near the village of Kuganavolok. The dump has been closed and its subsequent remediation is planned.

On Kizhi Island and in the surrounding area the researchers visited several illegal waste dumps – near the villages of Yamka, Oyativshchina, Telyatnikovo, Sennaya Guba, on Mal’kovets Island.

The first stage was the selection of sampling plots for in-depth study of human impact on the ecosystems of the protected areas. Soil and water samples were taken for further analysis. Researchers will determine the sanitary-bacteriological and parasitological parameters of the sites, levels of heavy metal pollution, and other indices representing the recreational load. Also, the areas were surveyed at first approach to identify invasive plant species. Field surveys of the selected areas will be continued in July and August.

Karelia CBC Programme is financed by the European Union, Republic of Finland, and the Russian Federation. 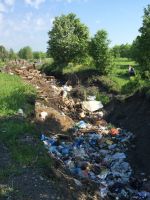