July 25, 2020
Collaboration with the Ruskeala Mining Park rises to a new level

On July 16 a working meeting of the Ruskeala Mining Park (Kolmas Karelia company), KarRC RAS, Russian Geographical Society and Museum Technologies company (St. Petersburg) took place at the Park’s Visitor Centre. The participants looked into a number of issues regarding interactions between KarRC RAS and Kolmas Karelia (including KarRC RAS’s contribution to the making of the park’s cultural and information centre), discussed pre-investment plans for the park’s development, and some other issues.
Presentations by KarRC RAS President O.N. Bakhmet and Kolmas Karelia Director General A.B. Artemiev included proposals on how to promote multifarious cooperation between KarRC RAS and the Ruskeala Mining Park based on the agreement signed late in October last year. This Agreement envisages research into the park’s surface, underground and underwater spaces. During the discussions, the parties have preliminarily agreed that in autumn 2020 already Karelian Research Centre will come up with suggestions on a number of long-term multidisciplinary research areas dealing with climate effects on the stability of underground spaces, hydrological characteristics of the reservoir in the canyon, as well as propose the material to be exhibited in the park’s newly created cultural and information centre.

The parties have agreed to jointly apply for grants and competitions, to prepare joint scholarly and popular publications. One of the joint activities will be the international project “European Underground Laboratories” (EUL), starting next year, financed by the EU Interreg Baltic Sea Region Programme with co-financing from the Russian Federation and Norway. The project is an extension of the international project BSUIN to be implemented under the specific objective 1.1. Research and innovation infrastructures. Apart from Russian partners – KarRC RAS, Kolmas Karelia company (Ruskeala Mining Park), V.G. Khlopin Radium Institute (St. Petersburg), the project partnership includes organizations from Finland, Germany, Poland, Latvia, Lithuania, and Estonia. 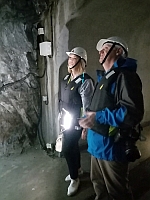 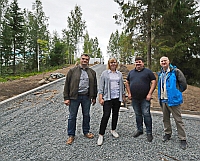